When North Sea Oil exploration and extraction was in its infancy, the engineering companies involved had a serious problem in so much as they had to employ divers to carry out work on the seabed, including surveying pipe work, valves and rigging. What’s wrong with that you may ask. Well, divers were divers, highly skilled in their art but they had short – comings as engineers. On the other hand engineers, who were useless at diving, had to sit in a small boat in the middle of the North Sea trying to communicate with these seabed comics who talked like Donald Duck.

And now the story begins;

The engineering section of a diving company decided they had to have a communications helmet that went with a wet suit. This helmet was to be in effect, a telephone box with filters and devices to convert the Donald Duck syndrome into intelligible English. How was it to be made?

Only a small number were required, less than 100. They had to have neutral buoyancy at 60 metres and this was achieved by spherically shaping lead sheet which was then sandwiched by the polyurethane foam in the dome section of the helmet. The amount of lead was precise and took into account the weight of the PU and all the other fittings. If the helmet was too light it would lift off from the wet suit taking the diver’s head with it. If it was too heavy it pressed his head into his shoulders. A handle was moulded to the dome and this had a formed stainless steel armature inside. It was intended to be the handle by which the helmet was carried on dry land but naturally it was used to drag an 85kg diver out of the water. Brass plates with M6 threaded holes in four places, were moulded in on both sides for attaching the bronze ring fittings. The visor of the helmet was held in position by 18off M6 moulded in brass inserts.

Inserts were also moulded in on the inside of the helmet to hold the microphone, it’s filters and transmitter. Consequently, the time taken for tool preparation for moulding was quite significant.

The mould was made “in house” under the guidance of Norman Berry. There were several issues to be considered:
a) the very low production volume

b) the choice of material

c) the high density of the moulding and d) the tool handling facilities that were available.

The male part of the tool was made from lignum vitae. You may ask why. The answer was ‘because it was there’. The internal profile of the helmet was critical, it had to be compact and yet accommodate all shapes of diver’s heads. British Standards came to the rescue and a size was agreed and achieved by machining a bung with only a ź degree draw angle. The window aperture was created by another piece of lignum vitae and was machined to match the circumference of the bung.

The female mould was cast in two halves using elevated temperature resistant epoxy resin. The male pattern was first coated with a straight gel coat followed by a thixotropic glass filled paste to a thickness of approximately 15mm and then bulk was added by heavily filling epoxy resin with coarse silver sand. It was in this layer that the temperature control water pipes were encapsulated together with the clamping and jacking screw inserts. 12 mm diameter bolt fixing was used in preference to toggle clamps.

The mould was designed for open pour moulding through the rim of the neck section in an upside down inclined position. The water blown polyurethane system, with a free rise density of 75kg/cu metre was over packed to provide a moulded density of 750kg/cu metre. A technique was developed to support the lead insert centrally in the cross section of the dome. Similarly, the armature in the handle was held central to the section. The lignum vitae appeared to have near self releasing properties which certainly helped considering the length of the draw and this eased the man handling of the mould in general. Carnuba wax was used as the releasing agent, (nowadays there are very good synthetic waxes available). The bung was withdrawn after six minutes and the helmet was removed from the rest of mould after 12 minutes. The over packing ensured that the surfaces were free from air inclusions.
The helmet met all the impact tests that were applicable and even had a truck driven over it for good measure. It was finished with bright yellow two pack PU paint to a high gloss level class ‘A’ finish. 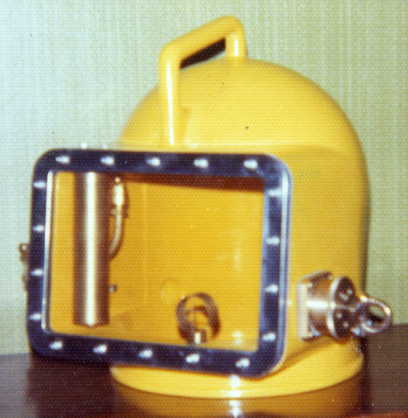 Your Content Goes HereThis telephone box helmet successfully served its purpose as a stopgap until engineers learned the art of diving.